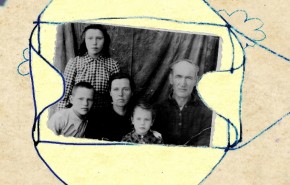 The documentary – animation is based on a life story of director’s grandparents who were exiled to Siberia by Soviets in 1948. The severe period of Lithuanian history is being told in a personal way, in genre of a fairytale. The story teller is a little girl, who sees the events in her own child way. The visual basis of the film consists of extant family photographs together with the national archive material and animation inserts.