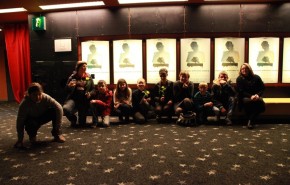 This  is a film without exterior action, props, landscapes or special effects. Its main characters are children and teenagers with a special ability to describe the surrounding world. Intimate conversations with them reveal the picture of the modern world – at times melancholic, at times comical, at times dramatic. Shot in a minimalist fashion, the film raises questions about loneliness, love, God, the world and human relations. “The world is people.” “Don’t you believe in God? I can teach you how to start believing…”

Bijan Tehrani: How did you come up with the idea of making CONVERSATIONS ON SERIOUS TOPICS?
Giedre Beinoriute: I was inspired by one book from acclaimed Lithuanian writer Vanda Juknaitė. V.Juknaite has interviewed children with special experiences (kids with special needs, deaf, blind, teens from youth jail, children from foster homes, from big families, from divorced families etc.) and put those interviews into the book „Tariamas is tamsos“. Someone even compared that book to the Holy Scriptures because of its philosophical depth. I was very impressed by this book. At first I thought maybe to recreate these conversations in a fiction film. But I realised that it was impossible. I had to find “my” children.

BT: The combination of the interviews and the way they are played in the film is an important factor in success of CONVERSATIONS ON SERIOUS TOPICS to communicate with audiences, how did you find the kids for your film?
GB: We did the casting. We were telling our friends and acquaintances that we’re making film and that we’re looking for children who would like to participate and could talk about life. We went to schools, art schools, foster homes, youth jail, circles and social homes. I had my handycam with me. I shortly introduced to children the film I wanted to make and if they were interested I asked a couple more questions.

BT: Please tell us about the editing stage of CONVERSATIONS ON SERIOUS TOPICS.
GB: The main difference from editing of “normal” films is that in “Conversations” I had to learn by heart almost all the material. Because usually you can have a glance to one frame from one shot and you know what is this shot about. But in this film you have only two shots from one child – close up and middle shot. And the beginning of the shot is the same as the end: the same child, the same location, the same light, the same framing and almost the same pose. I had to learn by heart the phrases and the moods so I could edit them with other phrases and moods.
Probably the most exciting experience was creating rhythm of this film – composing talking with pauses and sighs, fast talking with slow talking, close-ups with middle shots etc. It was very fine job and I liked it.

BT: How did you come up with the visual style of your film?
GB: We did the tests. Finally we came up with the idea that there are only two important things in this film – child’s face and his thoughts. So we decided to get rid of unwanted. No action, no social environment, no settings, no visual metaphors. We wanted the audience to focus on the dialog and enjoy the vitality of the human face.

BT: How do you the chances for CONVERSATIONS ON SERIOUS TOPICS to get an Oscar nomination or win the award?
GB: I don’t think about that.

BT: Please tell us about your next project.
GB: My next project is a feature fiction film. It is an adaptation of the novel “Breathing on marble” by Lithuanian writer Laura Sintija Cerniauskaite. This is the story of a young mother and her young family, which adopts a six-year-old boy who is unable to put down roots in his new family. Basically it deals with the similar questions like “Conversations” – bonds between people, our responsibility for each other, closeness.